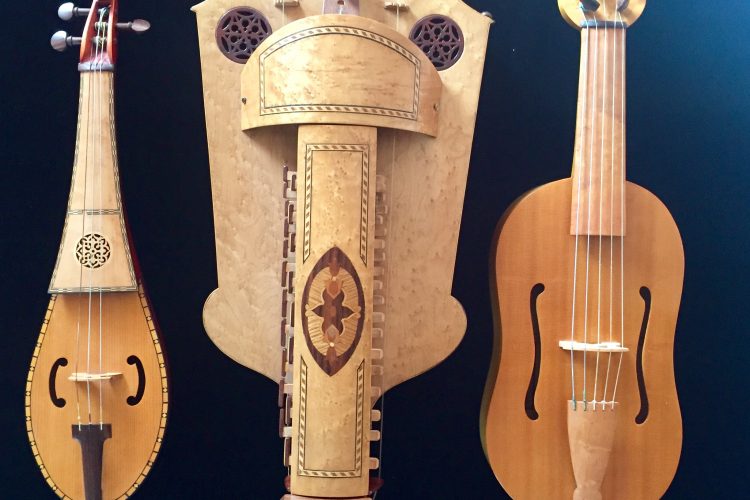 These instruments were built by hand in the 1970’s and 80’s in the historically accurate manner by the late George B. Cassis, a Baltimore,Maryland luthier who died in 1986. Mr. Cassis built a number of early music instruments including Viola de Gambas and Barytons. His instruments have been on display in collections of early music instruments at the Smithsonian Institute in Washington, D.C. One of his Barytons is owned by renowned performer, Roland Hutchinson. Another of his Barytons was featured on a 1981 recording of Haydn Baryton Trios, played by John Hsu. One of Mr. Cassis’ Viola de Gambas was also in Professor Hsu’s collection.

The Rebec has a spruce top, maple fingerboard and fruitwood back. It is beautifully inlaid, very light and resonant, and built, as were the historic versions, without the internal sound post. 23” in length, 17” string length.

This Vielle is a medieval 5 string bowed instrument built of spruce and maple similar to a violin but longer and deeper.

This Hurdy Gurdy is a French trapezoidal model dating from the 1500’s and is made from many hardwoods including maple and rosewood. The 3 stringed instrument (1 melody, 2 drones) has a rosined wheel turned by a crank that gives a continuous bagpipe-like sound.